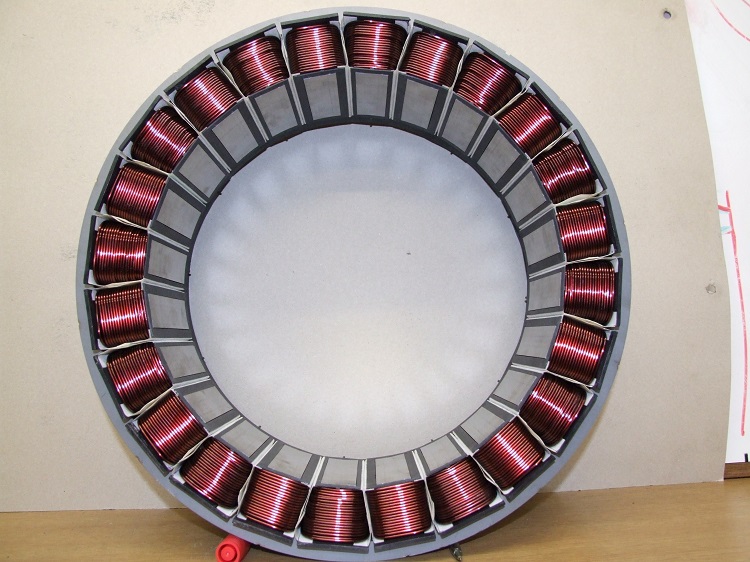 A critical requirement is ease of integration to the engine and transmission drive-line of a commercial vehicle power train; the machine needs to be relatively short†to provide minimal impact on the existing vehicle power train length and to reduce cost and complexity of any vehicle†modifications. Cummins considered several different machine configurations including induction, switched reluctance and axial and radial flux permanent magnet.

The selection process identified the best solution to be a liquid cooled, multi-pole, radial flux permanent magnet machine (Figure 1). Critical criteria such as short length, high efficiency, ease of manufacture, simple integration to the drive-line and low inertia are met with the selected machine topology. A relatively high number of poles with a concentrated, non-overlapping, stator winding arrangement has been selected to achieve very high torque (660Nm) and maximum machine length requirement (200 mm).

The journey of designing and developing permanent magnet machines at Cummins Generator Technologies began in 2000 when a brand new Research & Technology Team was established to design and validate new topologies for permanent magnet alternators and power electronics converters. The team's original focus was power generation applications where the objective was to reduce fuel consumption of diesel generating sets.

New opportunities in mobile power applications also drove a focus on size and weight reduction. The first specially packaged permanent magnet alternators and power conditioning systems developed by this team were commercially released in 2004 for military applications where reduced size, weight and fuel savings are of critical importance.

In 2006, the team began development of a permanent magnet machine and power electronics converter for hybrid commercial vehicles. The resultant system, which was developed in collaboration with Cummins' engine and power train specialists, can be used in a wide range of hybrid architectures such as series, parallel and combined parallel and series hybrid.

The universal design of the machine enables coupling to any drive-line using the SAE 2 housing layout and is capable of using any manufacturer's drive-shaft. Also, since the torque produced by the engine is transmitted only by the driveshaft and†not through the rotor, the rotor casting need not be a high strength material or, alternatively, can be optimised for relatively low mass.

The Cummins machine has a water-glycol cooling passage within the aluminium housing making it compatible with traditional engine and vehicle cooling systems. The water cooling manifold contains two threaded o-ring ports to allow the customer to fit a range of inlet and outlet connector pipes. Hoses from the relevant cooling system can then be connected to these pipes. To facilitate integration, the manifold has been designed as a separate component which allows significant variability of the machine's radial orientation.

Follow this link to learn about the journey of creating an electrical motor generator for hybrid electric vehicle applications.