While it is dangerous to make general characterizations about anything as complex as generator design, we describe the difference in design between bar-wound (also called form-wound) and wire-wound (also called random-wound) generators, and provide recommendations for the use of each type by system designers.

Figure 1 shows section views of typical stator slots in bar-wound and wire-wound machines. Note that the stator windings in the bar-wound machine are composed of bar assemblies that are laid in the slot in a precise mechanical configuration. 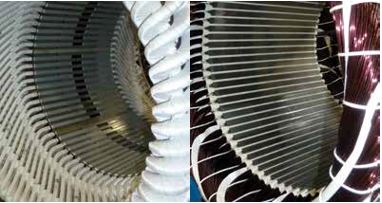 Figure 1 Winding and slot size comparison shows that for similar winding size, the slot size of a wire-wound machine (above right) will be much smaller, resulting in lower harmonic distortion in voltage produced

In order to lay the bars into the slot, the opening to the slot has to be quite large, and this leads to some of the most important differences in performance between bar-wound and wire-wound machines.

Wire-wound generator designs
In a wire-wound design, the generator windings are usually pre-formed wire bundles, which are inserted into the stator, often by machine processes. Note that with the wire-wound design the slot opening is significantly smaller, and the individual windings are composed of much smaller cross-section materials. Note also that the insulation space between the individual wires is less than with the bar-wound coils.

■ The bar-wound machine will generally have more space for insulation than there is available between the wires in a wire-wound machine. Added insulation is most important in medium-voltage generators where the difference in voltage between the conductors is greater. On the other hand, the greater levels of insulation in the bar-wound design tend to make it more difficult to cool the machine, so more materials are needed to reach similar temperature rise goals.

[From the customer’s perspective, the objective is to buy a product that satisfies their functional requirements and has the best quality price ratio.]

Application recommendations
The physical characteristics and performance differences in the two basic generator designs lead to the following recommendations for their use:

Bar-wound designs are generally more desirable for medium-voltage applications. In these situations the ability to provide better turn-to-turn insulation will result in a more reliable machine, with relatively minor sacrifices in cost.

Bar-wound designs are also generally desirable for prime power applications that need the more rugged mechanical strength of the bar-wound design. In particular, applications that use continuous, repeated surge loads to the machine are usually best served with a bar-wound design. The surge loads result in magnetic reactions in the windings, particularly in the end turns of the stator, that tend to deform the windings, or even break them over time. With a rigid, heavily braced design, the impact of these mechanical stresses can be more easily mitigated.

A common situation of this type occurs in oil-field applications, where drilling operations put continuous sudden loads on the generator set. Wire-wound designs tend to provide the best performance in terms of voltage waveform quality, resistance to waveform distortion, short circuit performance, and motor-starting performance. Thus they are almost always the best choice for line voltage applications in emergency/standby situations. This is particularly true in situations where there are large motor loads or when good waveform quality is important, such as due to the presence of non-linear loads in the system.

Applications such as uninterruptible power supply (UPS) for data centers, water treatment or sewage lift can often benefit from a wire-wound generator. These applications have heavy concentrations of rectifier-based loads. They are different from, say, drilling applications in that loads are applied to the generator in a relatively gradual process to minimize voltage sags and swells, whether operating on the utility service or generator set power.

For example, UPS will ramp loads onto a generator set after a power failure, and it will draw reserve power from a battery supply when a sudden load is applied to its output. These loads on the generator set are much less mechanically stressful than those from drilling applications. Consequently, there is no clear need for the bar-wound design, and the greater efficiency of the wire-wound design may be desired.

Both bar-wound and wire-wound designs need special protection when used in harsh environments such as coastal areas or where they could suffer from corrosion.

Conclusion
The bottom line is that there are no applications that absolutely require one generator design over another. In general, for similar-sized machines, the bar-wound machine is best suited to high-voltage applications and cases where the loads subject the generator to severe mechanical stresses. The wire-wound machine, properly constructed, will provide the best service in applications where motor-starting capability and the best resistance to waveform distortion are important.